Portraits with Santa Claus are a tradition that dates back to 1943 in a Seattle department store.  Since then, millions of children have visited Santa, sat on his lap, cried, screamed, laughed, and wished for their favorite toys.  Countless movie scenes and mall promotions have made the annual tradition a part of the fabric of America.

Not long after shopping malls invented “Photos with Santa”, portrait studios quickly followed and offered their own versions.  In 1977, our studio opened in a small space in Dallas.  Ray Ivey and his wife Janie, who were largely sports and school photographers, quickly adopted the tradition and offered their version of Santa photos.  Things have changed since 1977, but Santa still keeps his schedule open for Ivey Photography!

in 2012, we adopted a new version of Santa photos, based on a studio in North Carolina owned by Larry Hersberger.  His version of the tradition allowed more time for children to get comfortable and allowed him to do more storytelling with his art.  At the time, we called it “Fine Art Portrait Experience with Santa by Ivey Photography”.  What a mouthful!  Despite the long name, our tradition was born and the one-hour visit with Santa started to grow.  That first year, we only had 24 clients try us out.  By the next year, word got out and we grew to 88 sessions!  By year three, we opened a second location in Richardson, TX and we grew again, this time, up to 120 sessions with Santa, and with clients now coming from other states, as far away as California and New York!

Our name changed to The Storybook Santa Experience and we’ve now operated in Midlothian and Keller for the past 3 years.  We have been featured in magazines, TV, and trade publications.  I have spoken about our program at State, Regional, and National photography conferences.  We now have partner studios (similar to a franchise) in California, Ohio, Utah, Illinois, and Florida.

This year is our 10th Anniversary and we’ve made a name change.  We have a Manifesto, a document that guides the belief system that is the rudder of our company.  In that document, we use words like Tradition, Legacy, Imagination, and Quality.  When we decided to rename our Santa Experience, we wanted those beliefs to be reflected in the name.

Believe.  This one word defines what we do.  Children believe.  Parents believe.  And we believe, in things that are good; in hope; in our future; in our work.  The experience we offer puts you and your children in a temporary state of bliss.  Nothing exists outside, not work, not problems, not money, not politics, just belief.  We love that.  And when people leave after their experience, we know they love it, too. 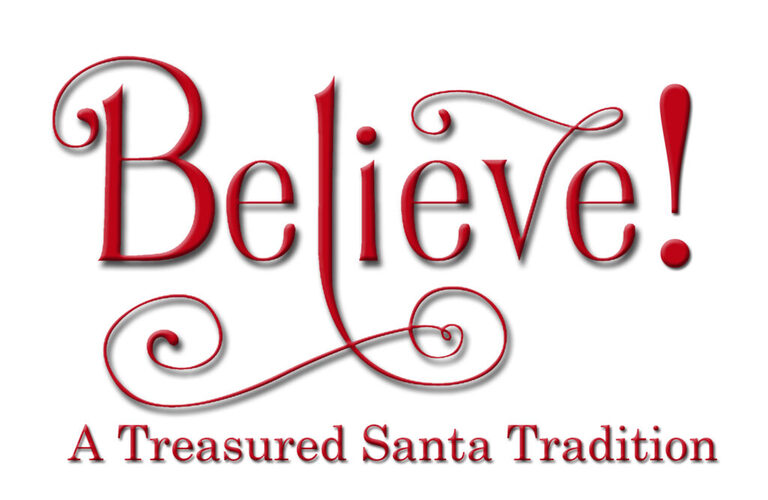 On the surface, maybe it seems like a bit much.  But when you break it down, it is exactly what it says, and more.  Treasured.  Ask anyone who has one of our albums or a piece of our art hanging in their home, and treasured is surely a word they use to describe it.  I once had a client tell me that if there was a fire in her home, she would go back in for her Santa Album before her own wedding photos!  Santa – obvious.  Tradition.  SInce we started, we have had clients come as many as 10 times to see Santa.  We often hear of people visiting The Northpark Mall Santa for as many as 25 years!  But in our dreams, we never imagined people would love what we do enough to come back again and again and again.  After that many times, we call those people friends.  It is hard to see those children “graduate” from our program.

We do hope you’ll make our experience a part of your family’s tradition, and you’ll treasure the art we create for you.  But most of all, we hope you Believe!

Check out this collection of images from over the years, dating back to Santa Jeff’s first Santa ever portrait with us!